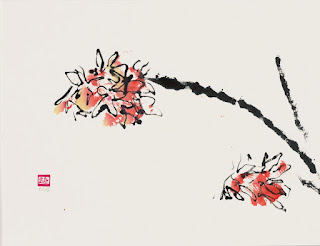 Painting and music have coexisted for centuries as forms of creative expression. The traditional Western painting was focused on realism and storytelling, whereas the Eastern painting was free, simple and focused on emotions and spirit. The same applies to music. Western music, like the painting, is also narrative in structure, where Eastern music consists of simple, single, select notes. Both Eastern music and painting provoke a feeling of contemplation and inner connection. Their expression is circular, rather than progressive, linear like in Western art?

In the nineteenth and twentieth centuries, European and American art was influenced by Eastern paintings, music and spiritual ideas of the Chinese and Japanese, thus minimizing the gap between their expression.

Music and painting merge together in the Sumi-e painting method, developed by my late teacher, Tomoko Kodama. The mindful presence in the line is essential for doing Sumi-e paintings, which is based on Chinese/Japanese calligraphy. As one paints, one imagines that there are many dots within the line, just like there are many notes within a piece of music. So as one paints a line, one actually make a little sound (in one’s mind) for those dots, like ti, ti, ti, or la, la la… some longer and some shorter notes, creating a thicker and thinner line. One becomes very centered, mindful, and connected. For the artistic purposes, one produces a very vibrant line, an image full of energy…. music for the eyes.